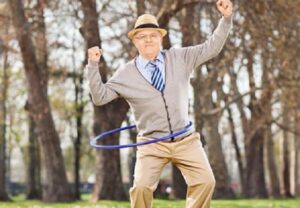 Research on the health of former lab animals shows that for chimpanzees, and probably for people, “it’s not physical activity, but inactivity, that makes us frail.”

When Auntie Rose died in early 2007, she was the oldest wild chimpanzee known to humankind. At around 63 years old, she was very elderly for a chimp, and her final months had been difficult. “She had lost all her body hair, and she just crawled about in the forest,” recalls Emily Otali, field director of the Kibale Chimpanzee Project in Uganda and a National Geographic Explorer. “I felt sorry for her.”

Still, until the very end, Auntie Rose had been fending for herself. Adult chimpanzees rarely share food, not even with the old-timers, so elderly animals have to keep up the effort required to find their own meals. Aging animals in the wild are less active, Otali says, and may become a bit feeble too, losing muscle mass as they age. “But they handle old age much better than we do. They just power along, it’s amazing.”

Meanwhile, chimps at biomedical research facilities in the United States were considered to be geriatric once past the age of 35. Four facilities kept hundreds of chimpanzees for years, conducting experiments designed to help us cure or prevent human disease. When these captive animals started developing familiar ailments associated with aging in humans, such as heart conditions and diabetes, researchers marveled at how similar our closest relatives were to us.

By the time the National Institutes of Health (NIH) decided in 2015 to stop invasive research on chimpanzees and move the animals to sanctuaries in the U.S., a report found that dozens of them, many much younger than 60, were now too frail to move. But the experiments they had been subjected to may only be part of the explanation.

Research on chimpanzees in the wild and in African sanctuaries where they have plenty of space to roam shows surprisingly better health in aging animals, compared to their lab counterparts. This provides some clear lessons on ways to care for chimps still held in captivity.

It also suggests that studying the health issues of lab chimps may not have taught us much about their natural aging. Instead, the fate of these ailing captive chimps may tell us more about the risks of increasingly sedentary lifestyles for many present-day humans.

People often become less active as they age, inspired by the self-fulfilling prophecy that their bodies are naturally weakening and that their condition is therefore inevitably deteriorating. Yet even wild chimpanzees like Auntie Rose, who had to walk many miles a day to find food and did not receive health care when ill or injured, appear to be aging in a healthier way, says anthropologist Melissa Emery Thompson of the University of New Mexico, a co-director of the Kibale Chimpanzee Project.

Studies in people with hunter-gatherer lifestyles, many of whom remain very active until the end of their lives, also often show that they stay healthy much longer than those of us taking it easy as we grow older, says Emery Thompson. For instance, the walking speed of the Hadza in Tanzania, who keep up their foraging duties throughout life, does not appear to significantly decrease as they grow older.

“It’s not physical activity, but inactivity, that makes us frail,” she says.

The best of both worlds

At the Ngamba Island Chimpanzee Sanctuary in Uganda, chimpanzees confiscated from poachers live in large tropical forest enclosures, where they are free to roam. They receive a yearly health check, in which veterinarians sedate the animals, providing the perfect opportunity to collect data on the aging process.

“Based on studies in captive populations, scientists thought chimpanzees had very high levels of cholesterol,” says anthropologist Alexandra Rosati of the University of Michigan. But in a recent study, Rosati and her colleagues found that chimpanzees at the Ngamba Island sanctuary had much lower cholesterol than lab chimps.

Similarly, other markers of cardiovascular health risk, such as body weight, were lower in the chimpanzees of Ngamba Island, says Rosati. The explanation, she adds, may be that they move around more than the lab chimps could. They also eat more fruits and vegetables, some of which grow wild in the enclosure, and less of the nutrient-dense chimpanzee chow that was a common staple in labs.

It’s not that chimpanzees show no signs of aging, says Joshua Rukundo, formerly the head veterinarian and now the director of the Ngamba Island sanctuary. Inflammation of the joints is common in aging chimpanzees, he says. “They also often get dental problems, which leaves them unable to digest fibrous foods. A lack of food then affects their immunity, and they become vulnerable to disease.”

But he adds that most of these symptoms can be treated. In that sense, as far as healthy aging goes, the chimps at Ngamba Island may be living in the best of both worlds: Plenty of space to move around like they would in the wild, with some of the perks of captivity, like extra food and health care.

This may provide some inspiration on how best to care for the lab chimps now in sanctuaries in the United States, as well as apes and many other animals in zoos.

Use them or lose them

Similar insights recently emerged from one of the best-known ape populations in the world. The mountain gorillas in Volcanoes National Park, in northwestern Rwanda, have been studied since Dian Fossey started her research there in 1967. Since those early days, researchers have buried the bodies of wild gorillas that died a natural death in special cages that protect them from scavengers, keeping them safe for future studies. Since 2008, the National Geographic Society has supported the retrieval and study of these remains.

“It’s a really unique collection, with well over a hundred skeletons,” says anatomist Christopher Ruff of Johns Hopkins University, allowing the researchers to find out whether gorilla bones weaken with age like ours. In a recent study looking for signs of osteoporosis, which causes a loss of bone strength as humans age, Ruff and colleagues found that even though the cavities within gorillas’ bones expand like they do in humans, the strength of their bones does not decrease with age, and fractures are rare.

The many calcium-rich plants in the gorilla diet may be part of the explanation. But the most important factor, Ruff believes, is again physical activity. Even though mountain gorillas spend many hours a day sitting down and eating—which is how we usually see them on TV, while doing the same—they get plenty of exercise traveling up and down the region’s steep slopes.

This is crucial, says Ruff, as bones are constantly remodeled in response to the forces they experience. Unlike machine parts, our bones and muscles include living tissues that allow them to be actively reorganized and repaired when we use them—and let them fall into disrepair when we don’t. “You either use them or lose them,” says Ruff.

The good news for those of us emerging from the inactivity of COVID-19 lockdowns is that the reverse is also true, and increased exercise can still help weakened bodies recover.

Fortunately, many of the former lab chimpanzees also have the opportunity to put their aging muscles back to work. Hundreds of chimps from NIH-funded labs have been transferred to Chimp Haven, a sanctuary founded in 2005 in Keithville, Louisiana, where the retired apes have a lot of extra space to move around.

The animals at Chimp Haven are entirely off-limits to invasive research, and the requirements for scientists who want to study them are strict. In a statement sent to National Geographic, Chimp Haven operators say they have approved multiple mostly observational studies of the cognition, mobility, and microbiome of the aging chimps in their care. Some of these research efforts might one day also benefit human health, but the sanctuary’s priority is now squarely on the animals’ welfare.