Inspired by health, ethical, and environmental concerns, more and more people are eating plant-based foods and plant-based meat alternatives. And the range of options is growing rapidly. But how do veggie burgers and fake meats stack up? We know they can be better for the environment and the animals, but what about your health? This article evaluates the pros and cons of popular plant-based meat options.

Back in the 60s, when my parents were coming of age, the dream of a plant-based hamburger that could satisfy meat-eaters was practically inconceivable. The best they could find in their local health food co-ops were hockey puck-shaped patties comprised of lentils, red beans, corn, or wheat. These earnest imitations didn’t fool anybody. And nobody ever tried to cook them on a grill — at least, not twice.

Fast forward 50 years, and the plant-based, “fake animal products” industry is exploding. There are more alternatives to cheese, milk, butter, and eggs than ever before. Some taste and perform almost or as well as their animal analogues. And they’ve gone mainstream too; many mainstream supermarkets carry these products to cater to the growing number of consumers who are trying to curb their consumption of meat, dairy, and eggs.

And the part of that industry making the biggest technological strides is plant-based meats. Many grocery stores now carry several meat alternatives like plant-based burgers, hot dogs, and sausages. And more and more restaurants and fast food chains are adding plant-based burgers and other fake meats to their menus.

Is this a positive trend? What are the pros and cons of eating plant-based meat alternatives? Are they healthy, or just another way to grow heart disease and obesity?

The Rise of Plant-Based Burgers and Fake Meat 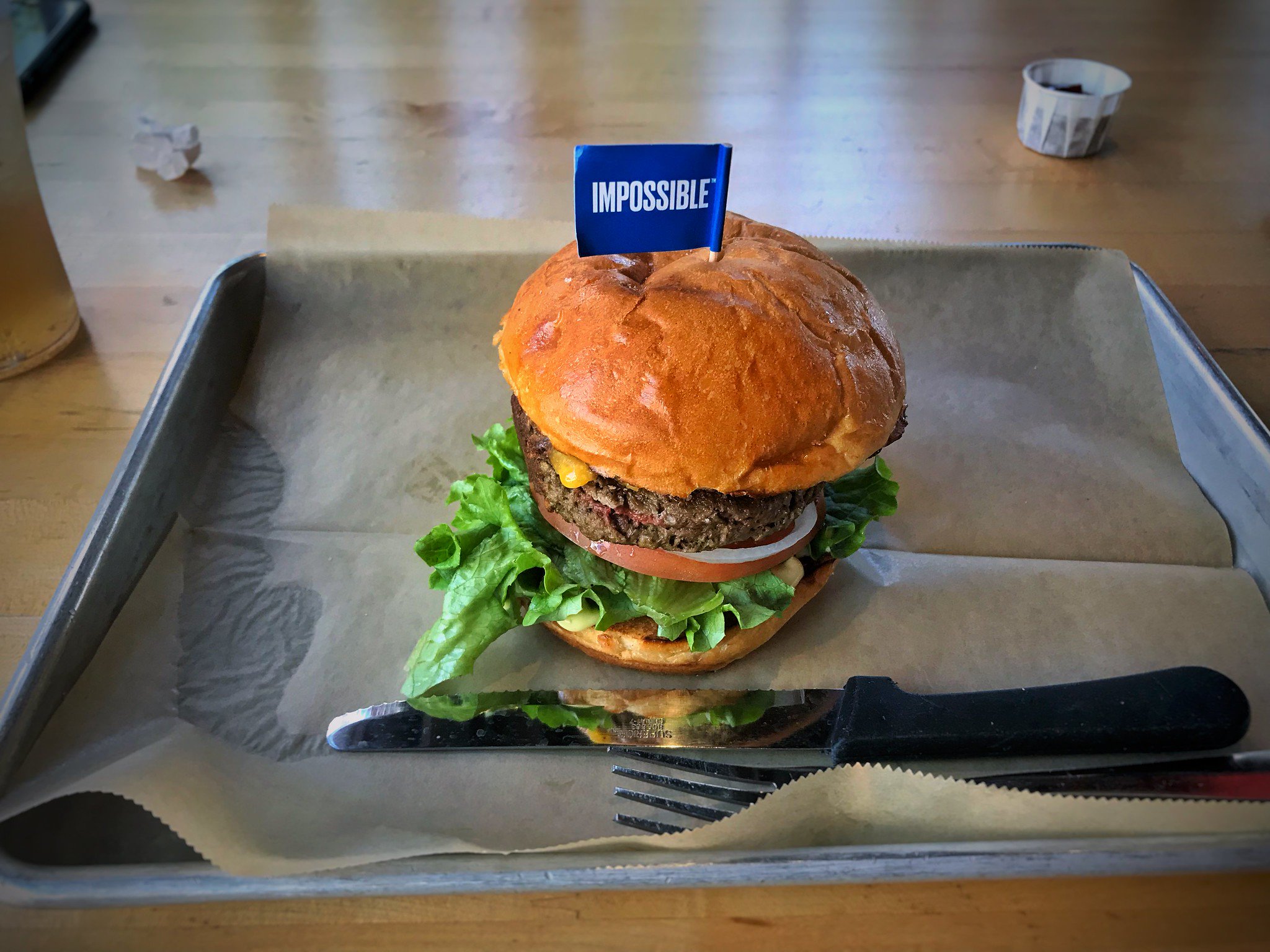 There are two plant-based burgers at the top of their game right now: Impossible Burger, by Impossible Foods, and Beyond Burger, by Beyond Meat.

After decades of “imposter burgers” that wouldn’t grill, or tasted like cardboard, or had the consistency of an orthodontic retainer, these two brands produce burgers that cook, smell, taste, and bleed like “real” meat.

Some people are even predicting that the competition will force McDonald’s to jump on the bandwagon.

Demand for these intensely realistic meat-free burgers is increasing exponentially, and so are profits. Beyond Meat recently went public, starting at $25 a share. By early summer of 2019, a share was trading at $168. Impossible Foods has reported a shortage in supply as they struggle to keep up with consumer demand for their burgers. And they’re not even selling in retail stores yet, but just in select restaurants.

Other companies can smell the opportunity and are following suit. Ikea recently announced its plan to develop a “realistic” meatless meatball, and Burger King plans to offer the Impossible Whopper on a national scale.

Why has there been such a rise in popularity? It seems there’s been a major shift in public consciousness. For many years, the primary reason people choose vegan and vegetarian foods was due to animal welfare concerns. But more recently, people are becoming increasingly aware of the impact of their food choices on the environment and their own health, too.

In 2015, the World Health Organization announced that red and processed meats were carcinogenic. And in 2018, the largest analysis to date on how farming damages the planet informed us that avoiding meat and dairy is the “single biggest way” to reduce your environmental footprint.

But in order to shift in a plant-based direction, we have to contend with the world’s burger obsession. In the U.S. alone, Americans are downing 50 billion burgers every year.

And that’s where veggie burgers come in.

How Do Plant-Based Meat Alternatives Compare to the “Real” Thing? 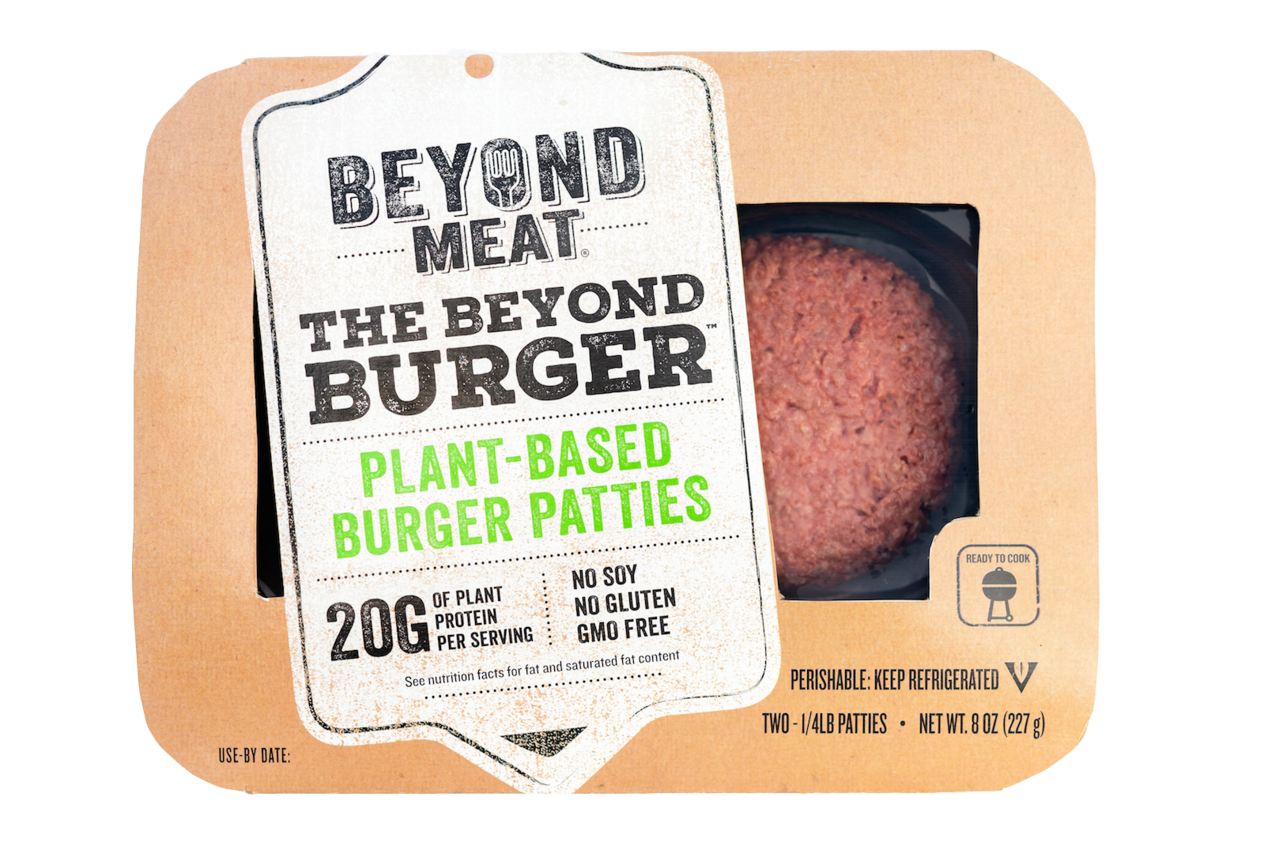 “The Beyond Burger” by BYMTDigital, CC BY-SA 4.0

Though Eurasian and Indian cultures have been eating vegetable patties for a long time (think Indian pakoras and Middle Eastern falafel), the first commercial veggie burger is thought to have been created in London in the early 1980s. Around the same time, Paul Wenner innovated the Gardenburger, which was served in his Oregon vegetarian restaurant.

If you just look at the ingredients list, you’ll see that veggie burgers appear to contain some good ingredients. They use plant-based protein — typically from peas, beans, lentils, soy, or gluten — in place of animal tissue. And while some of these protein sources may have their own problems, they don’t trigger the particular health, environmental, and ethical concerns that come with animal meat. Veggie burgers also contain fiber, even if in small quantities (the Impossible and Beyond burgers provide three and two grams of fiber per burger, respectively, which isn’t great, but is still more than beef, which contains no fiber whatsoever).

On the other hand, many commercially-prepared veggie burgers have some not-so-good qualities too. They’re highly processed foods and typically are high in sodium — which could be a problem for people with high blood pressure. Many brands use refined oils, saturated fats, “natural” flavors, sugar, genetically-modified ingredients, and other less healthy additives. Many veggie burgers also contain potential allergens, like soy, wheat, and nuts, as well as cheese or milk proteins if they’re vegetarian but not vegan. And there are sometimes ethical concerns too, such as Impossible Burger’s choice to test its plant-based heme source (leghemoglobin) on animals.

There are many veggie burgers available today, but most of them fall into a few main categories based on their protein source:

Pros: Most of the pea-based burgers are non-GMO. And peas have tremendous health benefits. Research shows that they are high in phytochemicals, antioxidants, important micronutrients like selenium, folate, and fiber. Peas may also have anticancer,cholesterol-lowering, and prebiotic properties that are good for your gut. Pea protein doesn’t offer the same nutrition as whole peas, but it still has some good things to offer. It contains all nine essential amino acids. It’s a great source of iron and branched-chain amino acids — especially arginine, leucine, isoleucine and valine — which are good for muscle strength and heart health. Additionally, pea protein is one of the most easily digested plant proteins.

Cons: Isolated pea protein extracted in a factory doesn’t retain many of the healthy qualities of the original pea. Pea protein burgers often have some less healthy ingredients in the mix, too. You can find refined oils  in the Beyond Burger (non-GMO canola oil and refined coconut oil) and Dr. Praeger’s burgers (avocado oil). Many pea protein burgers also have “natural flavors” listed on their ingredient list, which is an generic term that could mean just about anything…

Pros: The soy protein burgers offer a fair amount of iron. In fact, while Boca and Gardein contain around 10% of your daily value, the Impossible Burger actually provides 25% — which is more than a beef burger.

Cons: Since the vast majority of soy grown today is genetically-modified, it’s possible that these burgers contain GMOs (look for a non-GMO certification if this concerns you). The Impossible Burger recently changed its recipe to use GMO soy and actually tested 11 times higher for glyphosate (the primary active ingredient in Roundup) than the Beyond Burger. Soy protein burgers also often use refined oils. You’ll find sunflower and coconut oil in the Impossible Burger, canola oil in Gardein, and corn oil in the Boca Burger. “Natural flavors” are popular in these burgers too, as well as other additives you might be looking to avoid. For instance, the Impossible Burger contains cultured dextrose and modified food starch (which may also be GMO). The Boca Burger contains caramel color (which may be carcinogenic), and Gardein uses added sugars.

Pros: Sweet Earth burgers contain mostly all organic ingredients, so you don’t have to worry about GMOs.

Pros: Amy’s and Hilary’s contain mostly organic ingredients. One of the Gardenburger options features several types of mushrooms as a main ingredient.

Cons: Unfortunately, even though rice can be a decent protein source, it can be high in arsenic. Burgers that use other grains, like oats, may contain glyphosate if they were not grown organically. These burgers also use “natural flavors” and refined oils, like safflower or sunflower oil in Amy’s brand. Other additives may include vegetable and guar gum, annatto coloring, and soy lecithin in the Gardenburger. The Gardenburger brand also uses dairy and eggs, which come with health, ethical, and environmental downsides.

Also referred to as “clean meat,” you may have heard of cell-based meat in the news recently. This is real animal meat made from cultured animal cells grown in a laboratory on a growth medium. And because the end result is real meat being sold to consumers, the USDA and FDA have agreed to regulate cell-based meat products jointly.

Considering the damage that factory farming has caused to public health, the planet, and the animals we label as food, it’s clear there are significant benefits to this new way of producing meat — at least in theory.

For one thing, no animal has to suffer to make it. Cell-based meat replaces the need for factory farming, which would prevent millions of unnecessary animal deaths every hour, and also significantly reduce methane emissions from livestock. It also caters to a huge demographic: meat eaters who don’t want to fully give up meat — perhaps due to taste, texture, and other preferences — but don’t want to support factory farming either.

That all sounds good, so what are the problems with it? It may be too soon to tell, since the technology is still under development, but here’s what we know so far. Historically, cell-based meat used fetal bovine serum (calf fetus blood) in its growing medium, which raises some enormous ethical concerns.

When a pregnant cow is killed, the fetus is removed from its mother and bled to death. The blood is then refined and turned into fetal bovine serum. Most of the cultured meat produced to date has been grown on this medium ― making it far from vegetarian-friendly. However, as the technology has progressed, some companies have begun to replace this with a plant-based growth medium.

To keep it from becoming dangerously contaminated, cell-based meat is also heavily dependent on antibiotics.

Even if the technology progresses in such a way that it becomes truly sustainable to produce, the biggest downside of cell-based meat might be that it won’t address the health concerns associated with eating saturated fats found in conventionally-grown meat. Red and processed meat products will continue to be carcinogenic, no matter how or where they’re grown, and will continue to pose risks to your heart and colon.

Finally, cell-based meat is an uncontrolled experiment on human health. Even though NASA has actually been studying and using this technology as a new way to feed astronauts on long space missions since 2001, we don’t yet have enough research on its safety.

While it’s easier than ever to buy commercially-produced, plant-based meat alternatives, the best veggie burgers or fake meats are still the ones you can make at home with whole foods. For instance, you can easily make your own plant-based meat alternatives using beans or lentils, cauliflower or other veggies. You can also use mushrooms, whole grains like millet, barley, and quinoa, organic tofu, tempeh, and seitan (if you aren’t gluten-free).

There’s no question in my mind that most of the commercially available plant-based meats are a step in the right direction. They can serve admirably as “transition foods” to get people eating less meat. And they can allow vegans and vegetarians to enjoy a realistic version of the comfort foods they may be missing.

But any burger is a lot more than the patty. Even the healthiest patty won’t do you much good if it’s fried in free-radical laden oil and served on a white flour bun while surrounded by commercial mayo and corn syrup sweetened ketchup.

And none of the commercial veggie burgers are exactly whole foods. So, you might want to think of them as “treats,” rather than staples of your diet.

That way, you’ll be helping the planet and the animals without compromising your own health.