A 2019 study published in the peer-reviewed journal Clinical Gastroenterology and Hepatology reported the results of a study on the association of fish and long chain polyunsaturated fatty acids (LC-PUFAs) and colorectal cancer (CRC). CRC, also known as bowel cancer, includes both the colon and rectum.

Research was led by the European Prospective Investigation into Cancer and Nutrition (EPIC) using food frequency questionnaires and blood samples to determine whether eating fish and different fatty acids affected the risk of colorectal cancer (CRC). Researchers enrolled 521, 324 participants in 10 European countries and included results from 476,160 people (333,919 women) who had a full follow-up and provided dietary data and lifestyle habits.

Researchers found that after an average follow-up time of approximately 14.9 years, 6291 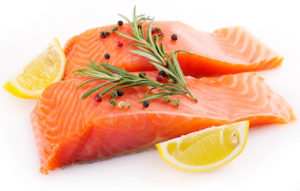 participants developed colorectal cancer. Those participants who consumed the most fish (equivalent to 2-3 servings per week) were 12% less likely to be in the group that developed CRC compared to those who ate less than one portion per week.

Comments on the UK’s NHS website indicate the importance of not getting carried away with this conclusion since when put in absolute terms only 1.3% of all people in the study developed bowel cancer:

Researchers also compared blood levels of fatty acids from a subgroup who developed cancer along with matched case controls. After adjusting for confounding factors, they did not find a link but stated that “there may be differences in risk at different regions of the colon.”

It’s no coincidence that healthy eating patterns is the topic of the 2015-2020 Dietary Guidelines with a mission of preventing diet-related chronic diseases. It is recommended that the general population consume approximately eight ounces of a variety of seafood per week, translating to approximately 250mg of EPA and DHA per day. EPA and DHA contribute to maintenance of cell membrane integrity, decreasing pro-inflammatory cytokines, and inhibiting inflammatory processes.

While n-6 LC-PUFAs and n-3 LC-PUFAs are both polyunsaturated fatty acids, the current study on CRC also found that the dietary ratio on-6:n-3 LC-PUFAs was associated with increased risk of colorectal cancer. Balancing this ratio should be a consideration on health outcomes given their differing metabolic effects on inflammation as shown. 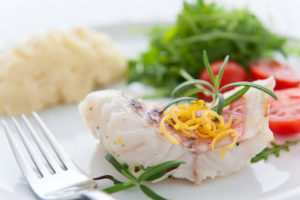 While this study was not able to prove that fish consumption alone protected from CRC, the results certainly support current recommendations that suggest fish should be part of a balanced and varied diet. The benefits are many including a good source of protein, healthy omega-3 fats (DHA & EPA), a good source of vitamin B12, vitamin D, iron, as well as several minerals such as selenium, taurine, and iodine.

While fatty fish is recommended due to its high level of n-3 fatty acids, lean fish, which also contains beneficial nutrients, should also be considered as part of a balanced healthy diet. Previous studies over the years found fish consumption protective against risk factors associated with cardiovascular disease and newer research indicates fish may have a protective role in preventing metabolic syndrome as well.

Researchers concluded that “In an analysis of dietary patterns of participants in the EPIC study, we found regular consumption of fish, at recommended levels, to be associated with a lower risk of CRC, possibly through exposure to n-3 LC-PUFA.”