This is part one of a two part article by Ocean Robbins, originally published on Food Network Revolution

Walk down the frozen dessert aisle at the grocery store, and you’ll find shelves upon shelves of ice cream, in both dairy and non-dairy varieties. Vegan ice cream has expanded in recent years, but are these moo-free options any healthier than the cow’s milk-based original? 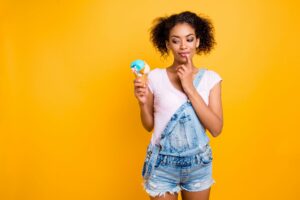 Well, yes and no. Some of the most popular non-dairy ice creams are cashew, almond, soy, rice, oat, and coconut milk-based. These are a nice reminder of how much the plant-based movement is growing, and they may be a fun, occasional treat. But most of them are still packed with added sugar.

In addition to sugar concerns, here are some things to be aware of when you’re strolling through the vegan ice cream section.