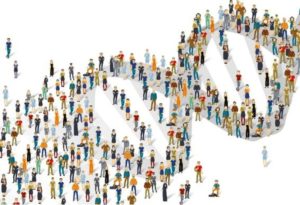 Historically, genetic evaluation has been dominated by a clinician-centric traditional model in which a patient’s physician had the central responsibility for testing, such as ordering the test and communicating the results. Conversely, in the direct-to-consumer (DTC) model, consumers are more empowered because they can order their own tests, obtain samples using home test kits, and receive the results directly from the laboratory or company that provides the test. The DTC market has expanded substantially, reigniting controversies over the potential implications of DTC testing for genetic health risks.1

However, little attention has been paid to the emergence and effect of new models of genetic testing that fall in a middle ground between the DTC model and the traditional model, which is also known as the hybrid laboratory model (eTable in the Supplement). This model is a hybrid because it is centric to both the consumer and the clinician in that hybrid laboratories facilitate easier consumer access, but a clinician (who may be the consumer’s regular physician or a physician provided from the laboratory’s network) orders the test and returns the results. This model emerged for a number of reasons. First, there was a perceived need to make testing more focused on the consumer and easier to obtain than testing from traditional laboratories, while also providing medical-grade testing so that the results can be used for clinical decision making, in contrast to the DTC model. Second, this approach presented a profit opportunity for laboratories by generating additional consumer demand via easier access and a network of partnering prescribers, while simultaneously addressing concerns about DTC testing.2

Hybrid laboratories are an increasing part of the marketplace and their testing volume and revenue have been rapidly increasing (eg, 1 company reported year-to-year growth in volume and revenue of >100% from 2017 to 2018) and for the same period reported testing volume has gone from 145 000 to 292 000 with revenue increasing from $68.2 million to $147.7 million.3 Although it is unclear what proportion of laboratories and testing volume or revenue fall into the 3 model types, at least 291 laboratories in the United States are performing genetic testing.4 One large traditional laboratory recently reported that it has conducted 4 million tests since its founding in 19915 and a hybrid laboratory reported it has conducted 1.4 million tests since its founding in 2004.6

The definition and roles of the hybrid model are poorly understood by consumers, clinicians, researchers, and policy makers. Hybrid models have rarely been examined as a distinct entity and when they have, they are usually labeled and studied as if they were DTC laboratories even though they are quite different. The emergence of the hybrid model has significant implications for everyone involved in genetic testing, providing both potential benefits such as improved access but also potential risks such as lower testing quality or inappropriate test ordering.

A Gap Between DTC and Traditional Models

The existence of DTC and traditional laboratory models, which are at 2 ends of the spectrum, left a gap in the middle of the spectrum. On the one hand, the DTC laboratory model addresses a gap in consumer engagement. It challenges the long-standing tenet exemplified by the traditional clinician-centric laboratory model: that the testing process and decisions must be facilitated by a clinician rather than the consumer. Testing is no longer confined to patients who are under the care of their clinician, but is available to consumers who are purchasing a consumer good. The extraordinary growth of DTC genetic testing suggests that consumers value more active roles in testing. The hybrid model, by facilitating easier consumer access, similarly addresses consumer desire for more engagement and choice in genetic testing.

However, the hybrid model retains a key aspect of the traditional model in that clinicians are still involved in the process because they must order the tests and communicate the results. The clinician who orders the test can be the patient’s regular physician or, when requested, many hybrid laboratories provide access to clinicians via third-party networks. There are no data in the public domain from hybrid laboratories that clarify what percentage of tests ordered are from the consumer’s regular physician vs from a consulting physician suggested by the hybrid laboratory. However, the required clinician involvement enables hybrid laboratories to be regulated in the same way as traditional laboratories and thus provide medical-grade results. This addresses a gap and key concern about the DTC model, in which results are not certified for use in clinical decision making. The legal and regulatory status of physicians acting as consultants for consumers who live in states in which they do not have a license to practice remains unclear.

The hybrid model also addresses the desire of patients for lower and more transparent prices. It is difficult to compare test prices because they vary by laboratory, self-pay price or insurer reimbursement, and patient payment assistance programs. However, in general, prices for genetic testing have declined (with more genes measured for the same or at a lower price) with DTC and hybrid laboratory models at the forefront of this trend. Test prices for breast cancer and related cancer risk panels are a good example. Until a Supreme Court decision in 2013, Myriad Genetics had a monopoly on testing for 2 key mutations (BRCA1/2) and charged approximately $4000 for this test. Current list prices are not available, but the 2015 list prices for cancer risk panels (including BRCA1/2 and other genes) from 3 traditional laboratories ranged from $3382 to $6040.7 In contrast, some hybrid laboratories charge an approximate self-pay price of $200 for a cancer risk panel that includes BRCA1/2 and other genes.

There are no published studies comparing the 3 different models to assess their benefits, risks, and effects on patient outcomes. Both potential benefits and unintended consequences exist (Below). Although stated concerns may reflect general concerns about genetic testing rather than be specific to the hybrid model, the emergence of this model has heightened concerns about issues such as the overuse of testing.

Potential Benefits and Concerns of a Hybrid Model for Genetic Testing

Consumers generally have a limited understanding of genetic testing and personalized medicine. In 1 survey of 1001 US adults, 66% reported that they have never heard or read anything about personalized or precision medicine.8 It is thus likely that consumers do not understand the differences in testing approaches across laboratory models (eg, how cancer risk test results from hybrid laboratories are different than those provided by DTC laboratories).1 It is also likely that clinicians’ perceptions of the benefits and risks vary widely; therefore, a wide variability exists whether they order testing from hybrid or traditional laboratories.

There are other challenges with hybrid laboratories. Lower self-pay prices may cause insurers to reduce their reimbursement rates, or cause them to perceive genetic testing as an over-the-counter product that does not need coverage. Because low-income consumers may not be able to afford a $200 test, they may be unable to obtain testing if self-payment becomes the norm. Laboratories at academic medical centers may not be able to match low prices at hybrid laboratories, and the resulting reduced testing volumes could have negative effects on their ability to fulfill their training and public service missions. More laboratories conducting testing may introduce additional variability in the quality and reporting of results, further confusing consumers and physicians. In addition, the emergence of the hybrid model has heightened concerns about the overuse of testing that does not improve health or personal outcomes.